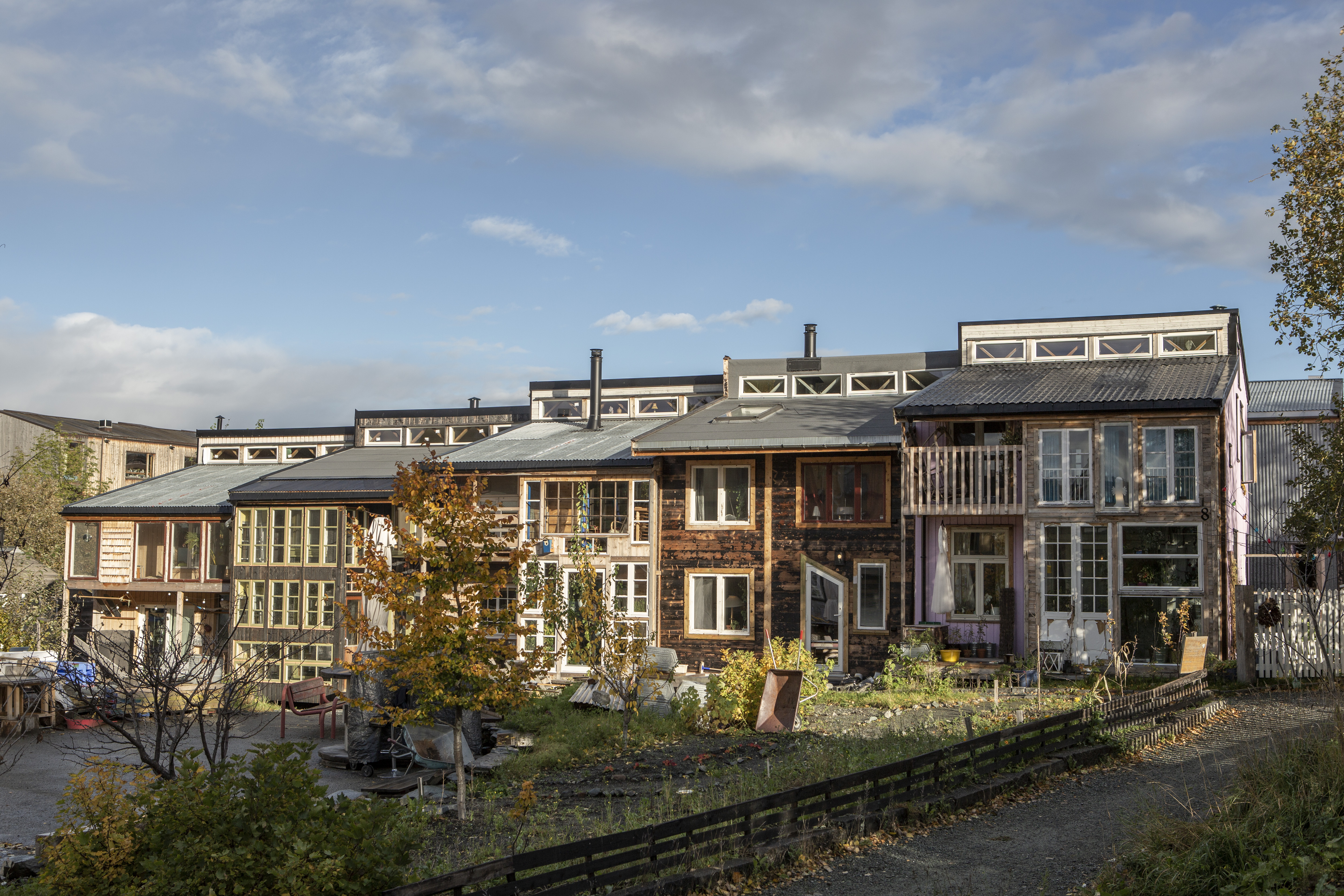 The experimental houses at Svartlamon are located in an urban ecological research area in Trondheim, Norway. Here five families have built their own row houses with a very low budget, relying on a lot of reuse, environmentally friendly materials, and their own manual labour and creativity, in a scheme developed by the young architectural practice Nøysom arkitekter.

The project traces its roots back to 2013, when Trygve Ohren and Haakon Haanes, who together with Cathrine Johansen Haanes is Nøysom arkitekter, decided to initiate a self-build project at an unused “experimental site” at Svartlamon. During the next two years, the architects continued to develop the concept with participation from the residents at Svartlamon, and later the self-builders themselves, before the actual building started in 2015. Before New Year 2018, after five years of planning and building, everyone had moved in.

The concept is a versatile architectural framework of five compact row houses connected with a common house, that the self-builders would be able to adapt to their own needs and preferences using what they could find of discarded or reused materials and components. The main design criteria were that the houses would be able to be built easily without specialists (except the plumbing and electricity), that they would fit into the existing structure of lowrise wooden buildings at Svartlamon, and that they would have a low ecological footprint.

The load bearing construction is a wooden stud frame structure made from Norwegian spruce, a cheap and readily available material in local building stores. The foundations are concrete pillars, made on site by the self-builders, who have even welded the rebars themselves. The houses are naturally ventilated, and natural, breathing insulation is lining the walls (hemp and wooden fibres). As this is a self-build project, the houses rely on as few technological systems as possible. The only unusual part of the structural design are the self-built wooden trusses between the two shed roofs, which allows a spacious and flexible living space. Within this simple structural framework, the self-builders have been able to use what they could find of reused and discarded materials and components, like old windows and doors. The result is an expression of their own desires, choices and creativity, a manifest to the struggle to take control over our own built environment. It is also incredibly cheap in a Norwegian context, with a building cost of under 900 EUR per square meter, pushing the boundaries of affordable housing in Norway. As for maintenance, if you can build something yourself, you can also change it!

After the concept was developed, the architects have been part of the process as facilitators, giving advice and helping the self-builders, which had no previous building experience, on site. There is also a professional carpenter employed by The Housing Association at Svartlamon helping out, as well as the rest of the community. The self-builders do not own the houses they have built, but are renting them from Svartlamon Housing Association, which is a non-profit organisation that leases the land at Svartlamon from the city of Trondheim, and rents it out to the residents in the urban ecological area. Svartlamon Housing Association has also funded the construction of a few new buildings in the area, including the experimental houses. Svartlamon is the perfect community for a project like this, and as a functioning urban ecological research area it is unique in Norway at the present time. This special regulation also made it possible for the architects to get the necessary dispensations from the Norwegian building code, to be able to do a project that is truly unique in the contemporary architecture scene in Norway, and that for this reason have created quite a stir in the architectural community.

The project is essentially a comment on and critique of the notion that a sustainable lifestyle is something you can buy, and that sustainable architecture is all about technological solutions to increase energy efficiency, while continuing our unhealthy addiction to ever-increasing consumption. Sustainability is about being able to adapt to one’s own environment using the means that are available, Nøysom arkitekter argue, and this is what the self-builders at Svartlamon are learning to do through this project. By taking house building into their own hands, they are also using much less resources and energy than the norm, which is supported by the fact that the houses are being built for under 1/4 of the regular cost for new buildings in the area. This also makes it possible for people that would normally not be able to afford to live in their own house in the city, to get a house built by and for themselves. Nøysom arkitekter set out to create a small housing project where the residents would be provided with the opportunity to adapt to their own environment, using what means are available in contemporary postindustrial society. The experimental houses at Svartlamon aims to show that it is actually possible to create a more sustainable urban environment through self-building and reuse. Whether this will encourage more experiments like this in Norway, only time will tell!

About the author
Nøysom arkitekter is a small, idealistic architectural practice founded by Cathrine Johansen Haanes, Haakon Haanes and Trygve Ohren in 2015. Their first and most influential project, “Experimental Housing at Svartlamon”, five self built houses made from reused materials at the urban ecological research area of Svartlamon in Trondheim, has been published widely, exhibited at The Norwegian National Museum of Architecture, received honorable mention in Trondheim municipality’s architectural prize, and was recently nominated to the 2019 European Union Prize for Contemporary Architecture.