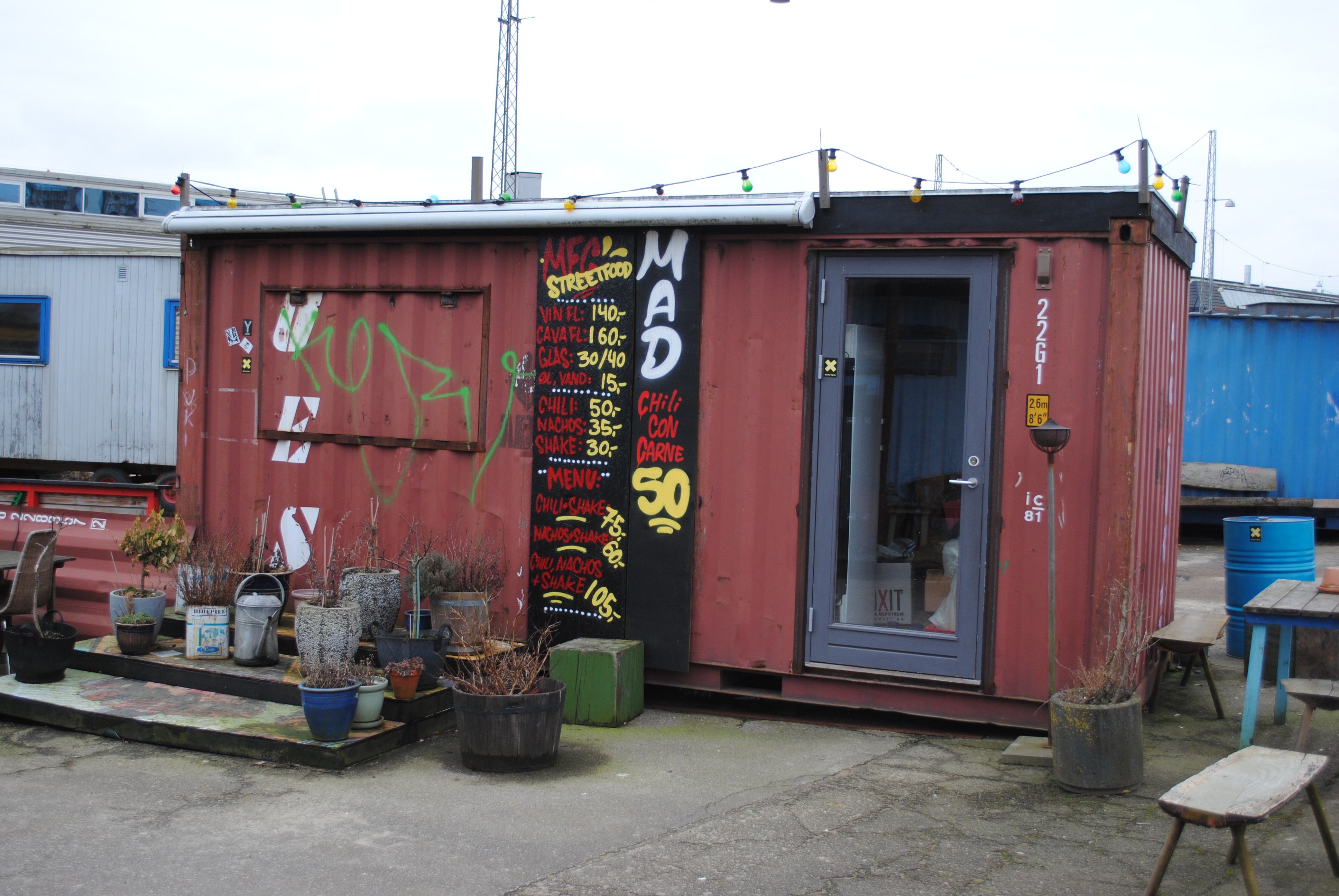 This article explores the shipping container as a tool in experimental urban development. In cities all over the world today, we see shipping containers used as building blocks in various development projects and it seems to be a evolving trend. With this article we want to highlight the container as a phenomenon, discuss its potential and question this new way of experimental planning.

The shipping container has a simple, raw and anonymous construction. It’s neither technically refined or especially beautiful. However, we see the standardized container used often in urban experiments and temporary projects. All over the world containers are transformed into cheap student housing, creative workshop spaces, pop-up exhibitions and aromatic street food restaurants. The various possibilities in reusing containers are endless, which can seem unusual and exciting for an object not originally intended for housing nor hipster dining.

To understand the idea of the container and its potential as a building block, we took a look at the major impact the container has had on contemporary global history. The invention of the 20 ft container created possibilities for both globalization and efficiency. Since the 1950s, container shipping has helped to better connect countries across seas and borders with seamless transportation flows. Countries have changed and rebuilt ports, trains and trucks to fit this box. Import and export are political keywords, economies are dependent on incoming goods to supply companies and people, and rely on the economy of shipping goods to other shores. With more than 90% of the worlds traded goods transported by cargo ships, the shipping industry affects countries’ competitiveness in the global market, with many harbour cities in competition to be the largest and most efficient port. The container and shipping industry gives a clear advantage to states with sea access and is a not an inconsequential factor in global inequality.

Containerization has led to outsourcing of production industries, which has meant an irreversible change in the circulation of goods and the lived reality for billions of people. You can say that the box is a magic tool of global capitalism, but it also comes with a cost with a heavy environmental footprint. Not just in terms of the amount of fossil fuels being used to produce and move around the boxes, but also oils spills, lost containers floating in the sea, and the pests and diseases that are spread through their transition.

Simply put, containerization has had an enormous impact on societies, our climate, planning practices, lived lifes and politics. It is a powerful and fascinating object to consider: the borders it has crossed and the goods it has carried. The container has travelled around the world and “explored” more countries and cultures than most of us. But when you start to unravel the mechanisms and effects the container is part of, you see a story that takes you even further than expected. The container had a share in the transformation of Western economies, that went from being production based to knowledge and experience based. Now it is on stage again, yet in a new role, but as part of the same momentum it was a part of creating.

The container as an urban experiment in Copenhagen

The container is a symbol of growth and development – not only as a shipping tool, but also in today’s urban development projects. After the container have served its duty on sea, it may serve another purpose on land, being transformed into a building block. In Denmark we import way more goods than we export, why a big amount of containers are “stranded” here. This is perhaps an explanation why several urban experiments in Copenhagen involves containers:

The story of Paper Island, an industrial harbour area, is mouth watering: In 2016 and 2017 an old warehouse was repurposed into a street food mekka full of container restaurants, which attracted 1,5 million guests – more guests than Copenhagen Zoo. Copenhagen also house “container cities” in various unused spaces. Small urban environments characterized by workshops, studios, informal housing, creative businesses or recreational spaces. These container cities offer a creative and offbeat alternative to the otherwise streamlined planning projects: Linjen – a place for “creative exploration and social sustainability in one of the city’s many gap sites” – and PostBox – “a creative setting, with a focus on communities through activities, design, and culture”. Both these container cities and Copenhagen Street Food were from the outset billed as temporary projects with the purpose of “maturing” the areas they inhabited. Despite their popularity, all three projects ended in 2017 to make space for a more mainstream/top-down urban development projects.

Another type of experiment is developed by CPH Village that offers “a new way to live for students” in rebuilt containers in Refshaleøen. Planning legislation in Copenhagen does not yet permit permanent building projects in the area of Refshaleøen, so the temporary and mobile nature of the container offers an effective answer to the urgent need for student housing.

There is a booming interest from both urban -planners, -makers and -consumers in having the container as an experimental part of the cityscape. One can argue that the decision to use containers often comes from a more or less precarious situation (such as the examples above, where the mobility of the container itself makes it possible to build and develop in short-term periods), but that also seems to be part of why the container has gotten a stronger symbolic value as hip and cutting-edge.

The reuse of containers can be seen as detours in more mainstream architecture, where up-cycled materials and spontaneous creativity are in focus. The imagined history and endless possibilities of the object (where has it been, what was carried, what could it become) connects to a wishful decision about sustainability (circular economy, up-cycling, green tech) and creates a cool and “urban” aesthetic expression in the city.

But can we perceive the container as a sign of a resistance against mainstream urban development? Or has it’s aesthetics been absorbed by capitalism – which it perhaps tried to fight at some point? When multinational companies use containers as a way to seem “eco-friendly” alarm bells ring. The container then becomes an object of green capitalism and one can start to feel the irony when new containers are produced to build cafés, office spaces, workshops or even football stadiums.

Architects both praise and criticize the object – as a building material, the container has some downsides too. The containers are often coated with toxic chemicals that makes them durable at sea, but not very suitable for living unless they undergo extensive treatment. Moreover, their dimensions may not be as flexible as they seem. Often a lot of rebuilding, or the combination of several containers together, is required. Where the container at first might seem like a low energy solution, such alterations often end up producing waste and requiring a lot of energy and new materials.
Do these reasons justify an argument against the use of containers for urban experimentation? Not necessarily. The container has the potential of opening our understanding of architecture, space and planning. It is a larger than life lego brick that instinctively connects us with playfulness and creativity.

But we have to stay critical and keep asking questions: Why is the container used here? Where does this container come from? Does the container invite permanent or temporary action? Why do we use hard shapes instead of soft shapes? What effect does its size have on the human body?

About the article
The container as phenomenon is still unfolding and we hope this small article of thoughts and reflections can contribute to an ongoing debate. The article distills some of the insights, questions and perspectives from The Container as Phenomenon panel debate and workshop during City Link Festival 2017 in Copenhagen. The debate was organized by urban planners Maria Blichfeldt and Esther Jexen Dall and moderated by Bettina Lamm, associate professor at Copenhagen University. The panel included John Andersen, professor in Planning Studies at Roskilde University, Sven Johannesen. co-author of the book “Verden i kasser” (“World in boxes”), and Benny Henningsen, part of Bureau Detours CPH.