Urban studies have for years seen the city as a fluid, temporary, flow space, so why call it ephemeral too? It is rare to see studies that show how people experience this city or how to plan for the ephemeral. The city is a fluid space exactly because its space is ephemeral, and this is a city of «intensive culture» and «a culture of difference, of inequivalence»  and «the one off, of the singular» (Lash 2010:3). The ephemeral is about contingency, becoming, emergence, configuration and constellation of forces. But it is first and foremost a lived «the infectious presence» that is the major force to the ephemeral city life (Chambers 1991:56). This city is a life of tactile perception, transistoriness, semiotic blurs, appearances, atmospheres, and the living among endless performative human, non-human, material, body-mind forces.

Such forces of the ephemeral living and experiencing represent the latent force of ruptures, the untimely, and circumstances to planning as well as life as it is a world of ever changing constellation of forces and experiences. Such latency is a threat to a society predicted on systemic order and a systemic taming or eradication of anything threatening disorder. What politics and planning doesn’t want is things just happening or taking place. ‘The taking place’ of things is anyway an inevitably fact of life (Anderson & Harrison 2010). When authorities and power-structures want certainty, coherence, predictability, order, and a cumulative knowledge that helps secure certainty and order, the ephemeral becomes a challenge. But on the other hand, the ephemeral experience is attractive to urban tourism and the innovative and creative city.

The ephemeral and planning

Modern city planning is guided by the task that «everything must be watched; nothing must be allowed simply to ‘happen’» (Hughes & Sadler 2007:13). We tend to overlook, that urban planning is always representing a ‘plan for an everyday life’ (Lefevbre 1982) and builds on judgements about how people should live. Planning politics and planning are not neutral, but build on moral and the ontological idea of a homogeneous culture (homology) and a common sense of cultural and place identity. The tool is the spatial dispositif of forms and functions (Foucault 1986, Osborne & Rose 1999, Pløger 2008); performative significations and discourses about living.

Another contemporary highlighted social ontology is ‘atmosphere’ (Heidegger 2007, Böhme 2014). Humans always Befinden Sich in a certain ‘mood’ and they look for a good Befindlichkeit; to be in Stimmung or to be ‘in tune’ (Heidegger 2007:156, Gumbrecht 2010). Martin Heidegger indicates that «all sensing, all understanding, happens from a Stimmung» (Fløistad 1968:196) A Stimmung intermediate between sense and meaning, and it is this oscillation that is important to see how it characterize situation, experience, and meaning (Gumbrecht 2012:10, see also Gumbrecht 2014).

Urban planning and an example of a thought fluid space

Neither the fluid space, identity or atmosphere are new perspectives to urban planning, but this insight is rarely related to ways of living, site specific socio-spatial intensities, and how people enter into these forces (Böhme 2014:56). It has not been about atmospheres, but spatial order. People’s position and dispositions, images and experienced atmosphere’s are objectified in a functional plan.

If urban planning did not operate from given ideologies, values, and a given collective identity, and accepted difference and atmosphere as forces to everyday life, the planning choice could be to make fluid plans based on themed areas. And planning could build on an ongoing dialogue between planners and users guiding the actual forms and functions made (a way forward suggested by, among others, ‘the non-plan planners and Yona Friedman. See Hughes & Sadler 2007). 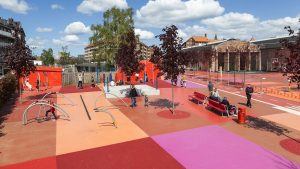 The ‘Superkilen’ project in Copenhagen is an urban design praised for its fluid forms and use. One of the areas of Superkilen is Røde Plads at Nørrebro, and this placeis seen as providing «a set of different stages for the participatory action of the sharing of life of its multitude of users» and a place with a «capacity to bring people together for cultural and emotional exchange» (Mostafavi 2017:12).

The city wanted the architects to design a meeting place between a social vulnerable area (Mølnerparken) and the resourceful surrounding of gentrifiers and young academics. The lifestyles should intertwine and entangle different cultures for mutual learning at Røde Plads. The implicit hope was of course to reduce tensions, conflicts and confrontations in the area by having ‘the resourceful’ cultures as inspiration.

However, the design of Røde Plads ended as a permanent physicality with no aim at giving space to a will to difference and a changeable, ephemeral use. Røde Plads is a huge open space with no intimacy. It is planned for young people to (primarily) skate. The space has play and competition as the common denominator for people using the space, and there is no ‘obvious’ or ‘functional’ connectivities between the neighborhoods social life and cultural difference and its urban space qualities. There is no atmosphere. It is a place used for looking at or passing by. and it doesn’t make an intimate Befindlichkeit to people living there.

Urban design is most often used as a spatial dispositif to secure that the form and functionality «invite to a certain use instead of others» (Østerberg 1991). Røde Plads is an example of a steady, but wrong, political and planning belief, that if people co-act, they will share a common identity (Sennett 1999).

Disorderly space – a path to the ephemeral space

It is possible to make ephemeral spaces. More than 40 years ago Richard Sennett (1970) made his subjectivity-sensitive critique of urban planning in his book ‘The Uses of Disorder’, and it seems the thoughts here now are an inspiration to urban design projects in London and Lisboa (Sendra 2015).

How to design for ‘disorder’? Sendra (2015) reads Sennett as saying that this is a matter of leaving space incomplete and have a space that encourage discovery and provocation. The space should be an «open system» open for «constant evolution and explorations». This could be an urban design that works as «the experience of passage» and provides people with a space of surprise.

The physical design of living space is necessary, but its functionality can be secured in many ways. Røde Plads is not ‘a space of disorder’ in its design, but a functional determinant space. You cannot move the things there, you cannot ‘design’ your own use of the space. The cultural pluralism is aestheticized in visual symbolic signs from around ‘the world’ (Asia, Africa etc). Røde Plads is not a temporary or fluid space, but a disciplined space to order and tame cultural difference. 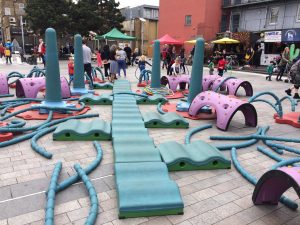 Following Sennett’s ideas of ‘the uses of disorder’ means to see urban space as an ephemeral and unfinished space. Cities can make such spaces by for instance having a surface space, that always can change use and content using different elements (Sendra 2015). One example of this is the Gillett Square in Hackney Borough, London.

2001 the ‘Gillett Square Partnership’ – GS2 – was made to do something to a square that for long time had served as a parking lot. The parking lot hosted a few small out-door shops (Kiosks) along one of the sides, but having become a ‘dead space’ the borough decided to change its functionality to a public meeting space. The Partnership was obliged to involve “the square’s community in decisions about the square and how it is used” (Sendra 2015:822), and the plan was to make the place a pop-up playground of festivals, art-forms, and community organized activities.

The partnership and the borough decided to have an ambition of making an ever-changing square of events, innovation, and entrepreneurship. They kept the small out-door business and made it a heritage site and part of the Hackney Borough and Dalston area conservation plan. The GS2 partnership is committed to work with possible socio-material symbiosis at place to build “relationships and interactions that produce tolerant sociability” (Sendra 2015:822) for instance by keeping the small business ‘market pods houses’ and kiosks there, and by making a local cultural house in one of the derelict factory premises.

The Gillett Square example tells that ‘a disorder space’ is possible. It shows a committed partnership is able to secure an on-going eventalization of the space guided by a local cultural pluralism. It is a space open to continual change from play, art installations, street theater, informal gatherings (picnic, ping-pong etc), dancing and festivals, because it is just a surface to be filled. The GS2 is committed to proactively enabling cultural events. People want the partnership to “continue to work with local arts producers” and also to improve the community engagement with planning. The aim is that Gillett Square can “build on and conserve its role as a unique community resource”.

The Gillett Square is one example of how a run-down urban area, by being transformed to an ephemeral space, has gained new local importance. The ephemeral space is here a space of disorder. Such a performative urbanism (Samson 2010, Wolfrum & Brandis 2014) or “micro-urbanism” (Davis 2013:104) shows, how cities should focus on “mutations possible”, and have an eye for potential mutations between conversation (respect for history), open public spaces (events), business (creativity), and ambiance (atmosphere) of space. This call for a space of “disorder” is a call for an always ephemeral and “unfinished” space (Sendra 2015:835).

Ephemeral urbanism – the experience in a disordered space

A public space is, in fact, an indifinite imaginary re-made space depending on what happens, who ‘reads’ it, and human-nonhuman connectivities made. A mutation of social diversity, multi-functional spaces, presence experiences, and the ever new eventalisation place, may be an attractive ‘disorder’, but not if it is experienced as a tamed disorder. An ephemeral space is one giving visitors an imagination of being part of a singular event and experience.

The mood of the ephemeral as the atmosphere of things ‘just taking place’ was something Røde Plads promised, but we have to go to Gillett Square to feel and experience it. In Denmark every public space is ordered and spatial designed (even in the ‘Playing City Odense’). Physignomy first, life after. The Gillett Square is an organized space, but it is keeping a spatial openness for a permanent changing use.

This openness to ephemerality is that it is a surface and not a designed form. A surface has change capacity and is a space of possible ‘addition’ (Sendra 2015). Gillett Square thus has the quality of being imagined as a space of processes and a place of becoming’s; precisely of ephemerals. It is a performative place of ‘presence atmospheres’ (Gumbrecht 2012), assemblages (Deleuze 2005), and aesthetics (Samson 2010). We may call this a ‘flat power’ of density and inertia; a formless space of possibles, openings, and potentials (Foucault 2007). An eventful agora.

About the author
John Pløger is a Professor of Urban Planning, University of Agder. He has published widel on urban planning and planning processes and within urban studies. He has recently publised ‘The Vital City’ in Norwegian (co-author Jonny Aspen, School of Archietcture and Design, Oslo) and he works as a consultant for architects in Denmark and Norway.